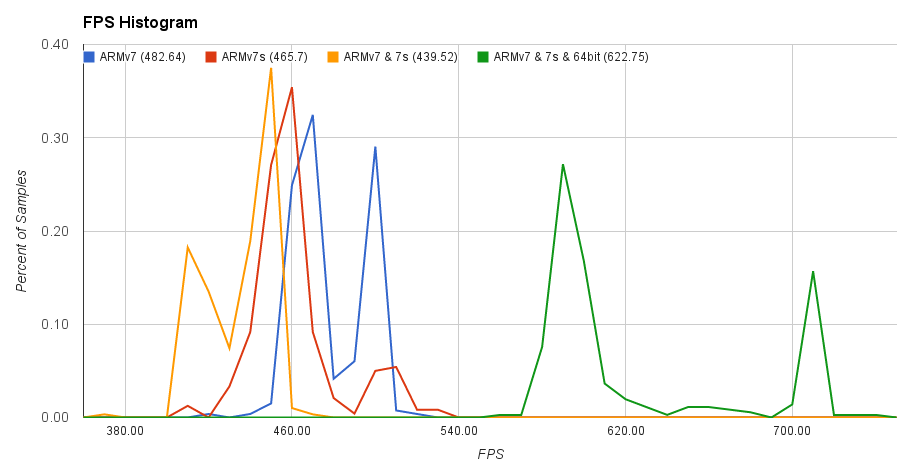 Now that I finally released the Android version of Zoing and Zoing Zero to the Google Play Store, I now can finally start working on some new features. But, before doing that I need to provide 64 bit support, as described by Apple. Fortunately, Xamarin makes this pretty easy. I recently updated my game to the Unified API, which includes support for ARM 64, and was entirely painless.

Aside from the requirement to do this, I also wondered how much of a performance improvement it might give me. I benchmarked Zoing built for ARM7, ARM7s, and ARM64. All of these runs were done on my iPhone 6 Plus.

Clearly the build that includes ARM64 does provide a huge performance improvement (average FPS of 622 compared to a best of 482 for previous builds). I find it interesting that the ARMv7s does not provide any benefit of ARMv7, but again this was testing on a iPhone 6 Plus, which contains the ARM64. Perhaps if I tested on an iPhone 5S I would have seen something different.

I should also explain these FPS numbers. iOS actually limits OpenGL animations to a maximum of 60 FPS. For the purposes of this benchmark I run my game's logic loop as fast as I can, but show the screen only once every 1,000 logic-loop cycles. This allows me to benchmark my code's efficiency as well as these CPU changes.

I will try to blog a little more often going forward, but I've said that before too. ;-)
Posted by Rainer at 7:15 PM